Neids: Wine and the Army

I have collected enough puzzle pieces about my Neid family to feel inspired to write an article about everything.

Christian Neid is my great-great grandfather, born somewhere in Prussia around 1834 and living in Potosi, Wisconsin by 1880. Those are all the facts I was able to glean from Ancestry.com. He seemed to be parent-less and sibling-less, and married a similarly unconnected woman name Kate Roemer once he was settled in Potosi.


Other than that, my trusty Aunt Kathie took some notes from her mom's remembrances about her Neid grandparents. After coming over to Wisconsin from Germany, Christian bought a 133 acre farm and the family "Made wine, supplied priests, large basket of grapes for 25 cents, sold wine." I get the impression that wine was involved. (Presumably they supplied priests with wine, and not that they grew priests in the field to supply the Church.) Potosi was actually once well-known for both its wine and beer production (wine fell out of favor during Prohibition, but the brewery survived with near-beer), so Christian was contributing his 133 acres of grapes to the cause. Rumor has it (thank you, Aunt Kathie) that one of our Potosi ancestors was an alcoholic that had a still and made moonshine during Prohibition. I'm not saying it was Christian Neid, but... he did make wine. Family lore also has it that this same alcoholic donated land to St. Thomas Church that became the St. Thomas Cemetery in Potosi. (Note to self: Check old land maps at Lancaster for the Neid acreage and vicinity to the cemetery.)

Now that I'm putting this story together, it occurs to me that this brand of the family has a lot of connections to alcohol. Christian's wife Kate, before she became Mrs. Neid, worked as a house servant for William Mohrenberg, a brewer in Potosi.

Moving on... as I mentioned before, Christian Neid seemed to be in America on his own, and I was okay with that. But, my curiosity was piqued when I came across the Neid name on a marriage license for a Potosi couple--Mary Elizabeth Neid married John Richter in 1864. Actually, her last name is variously transcribed as Neid, Neil, or Neit. And her father's name is always transcribed as Foy. (Note to self: WHY have I not yet checked the state archives for the original? Because there's no way her dad's name is actually Foy.) 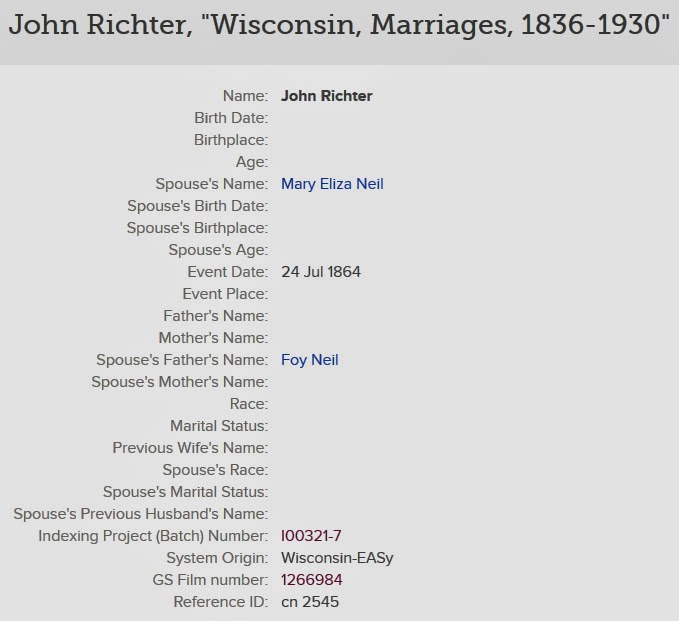 So that was mildly interesting, and I kept it in the back of my mind for years, until a few months ago I made an amazing connection on the 1880 census that I'd previously overlooked. 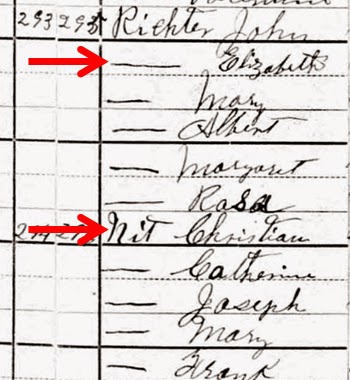 Elizabeth Neit/Neil/Neid, now Richter, and Christian Neid (or Nit, as the case may be) are neighbors. Now, I think it's fair to say that Neid is a fairly uncommon name. So what are the odds that two people born with that surname end up in Wisconsin living right next to each other and not be related? I then came to form the idea that Christian and Elizabeth were siblings--or at least cousins.


I contacted a Richter family researcher with my theory, and he was neither able to confirm nor deny it--which I was happy with. A flat out "no, that's impossible, because blah blah blah" would have been terrible.  Fortunately, he agreed that it did, indeed, seem possible; so it's still a working theory.

This researcher also put me on the path of a resource which led to my next big break--old Dubuque papers that Google digitized before giving up on that project (shame, shame, shame!) But, look what a search of those papers brought up for 2 Apr 1907:


JIMINY CRICKETS! I'd just found a sister (I hoped). Now there was a BROTHER, too? This was too much to handle. Geez, I didn't have much to go on, though, to find out anything about this nameless brother. But look what a quick search came up with:

Seriously? It's never that easy. That's just weird. The date of Louis Neid's death is about 10 days prior to the newspaper announcement in Dubuque, so I think he's a match. Wow. Christian Neid is gaining family members by leaps and bounds. Look who's enlisted in the army in 1875, in Highlands, New York:

That's Louis, age 35, and Alexander, age 17. Now all of a sudden I have two Neids serving in the US military. This is almost too much fun to handle. There are about 18 years between them; are they siblings, cousins, or father-son? Anyway, records show that they both had long careers in the military, but they parted ways after this one record. It's too bad I couldn't narrow now WHERE in Germany they were from. But wait... inexplicably, in 1895, the army felt like including a city along with country of birth for Lewis:

Experts (by which I mean some random people I asked on Facebook) agree that this says Mühlhausen, Prussia. Such a place does exist. Lookin' good!

But wait, there's more. I found this record on CastleGarden.org, and I think it might be my guy (going all the way back to Christian Neid now):

His place of last residence is this Birkenried place. In modern times, Birkenried seems to be the name of a German music festival, so it's hard to get any search results that don't involve that. There does not seem to be a current location that takes that name, though FamilySearch.org seems to think it's an alternate name for various locations in Poland and Russia named Loshchinka or Uszballen. I don't know what their source for that information is--they're cagey--but none of the locations are anywhere near Mühlhausen, so I wasn't happy. And then Chris was like "Let's look at a map" and he found this: 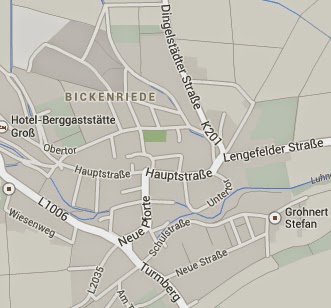 That's the little town of Bickenriede, just a few miles away from Mühlhausen. Could it be that BIRKENRIED IS A BAD TRANSCRIPTION OF BICKENRIEDE??? O. M. G.
So yeah, I'm pretty sure my Neids are from the Mühlhausen/Bickenriede neighborhood. What would be awesome is if I could find this building: 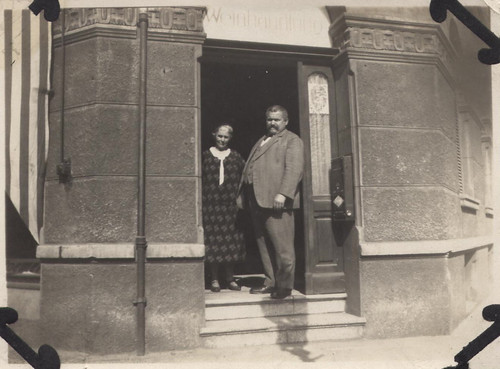 That's a picture my Grandma had; the only caption written on the back is "Germany." If you blow up the photo you can read a word in German on the door frame, and it says "Weinhandlung." And as I understand it, that is basically a wine store. So I think those are Neids. And I want to find that building, because it looks pretty serious.

I'm still investigating Louis and Alexander. Briefly, Louis retired from the army and settled in California; a census from this time lists his marital status as divorced, but I don't know who was married to or if they had children. Alexander seems to have settled in New York City and married a widow named Anna Tobin. And that leads to a mess of about a dozen children and stepchildren that I am just beginning to scratch the surface of. Now I'm just drowning in Neids.

But ultimately, the moral of this story is: Seriously, Google, get your crap together and digitize ALL THE NEWSPAPERS EVER. (I know your robots are reading this. You can't say you're ignorant of my request.)

Posted by Unknown at 5:26 PM No comments: