Observe! This is Christian Klar, Jr's Declaration of Intent to become an United States citizen, which would have been filed around 1849. 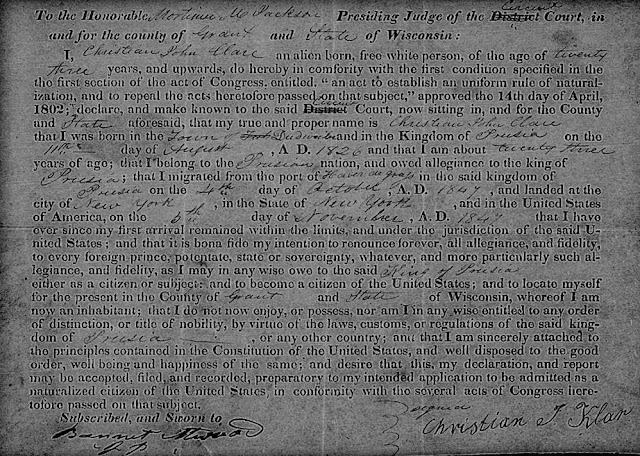 
You knew your port of arrival and an exact date? You get a gold star, Christian Klar Jr.

It turns out that 5 Nov 1847 was not a heavy day for German immigrants to New York. It was mostly people from Ireland and England. In fact, there only seem to be three Germans on 5 Nov, that ended up coming in on the ship Eliz. Dennison out of Liverpool. They were three men, occupation "Sailor": Benjamin Kase, age 26; Morris Bock, age 30, and Christian Wenterfisher, age 23.

Well, that’s interesting. I’m looking for a German named Christian coming in on November 5th, and sure enough there's a Christian from Germany in the right age range. The last name is completely off, however.

Another interesting detail is that one of his companions had the surname Kase. There’s a Kase family in Grant County.

These are two intriguing coincidences.

A precursory search for these three men on other records comes up with no ready leads. Maybe they had been travelling under fake names! What if they were running from the law and hitched a ride out of Liverpool under cover of being sailors? What if the old family story was true, that Christian Klar had killed a man back in Germany?

I’ve been to Dudweiler, and I can’t say that I'd blame him if he did. I'm sure I would end up murdering someone if I lived there. The restaurant service is terrible. I'm guessing that Christian was served a room-temperature drink and was kept waiting hours for the bill when there was a secret cash register hidden in the back of the restaurant and the only server who comes by only speaks French. And that's when tempers flared and blood was shed, and suddenly, moving to America seemed like a really good idea. BECAUSE EVERY AMERICAN HAS A GOD-GIVEN RIGHT TO ICE IN HIS DRINK.

A record from the next day presents a somewhat more plausible scenario. On 6 November 1847, the ship Marianna sailed into New York containing an "Johan Clar" (remember, Johann/John is Christian’s middle name/possibly baptismal first name). He is mushed in together with a group of "Swiss," but there is a Spies family in the group (there are also Dudweiler Spies), so I’m inclined to consider this one a contender, too. Right alongside Christian Wenterfisher.

The Spies family consists of:

If these Spies are in your family, I want to talk! Can we confirm a Dudweiler connection?

Regardless of his name, Christian rolled into New York in 1847 one way or another, and promptly filed his Declaration of Intent two years later (two years being the time of residence required to file for this step toward citizenship). And he was already living in Grant County when he did the paperwork. The next notable event in the Klar story:

Notable immigrants from "Bavaria":
The Klars, Holzers, and Spies are the main families I'm concerned with, but the other names mixed in (Geibel, Meyer) may come into play someday.

Three years later, Chris "Klare" appears in the 1855 Wisconsin State Census for Grant County, Town of Platteville. Information on this census in limited, but we learn that Chris' household consists of 3 males and 4 females, of which 5 were foreign-born. Can we figure out who they all are? This is like one of those logic puzzles.

Christian Klar wouldn't be married for another couple of years. So:

Who was Margaret (possibly Mary) Klar born approx. 1815 that came with Christian Sr.? Ancestry member hvenitz who has studied the Einwohner von Dudweiler und Jägersfreude! has found that Christian and Mary Catherine had a daughter named Margaret born in 1824 who married Johann Georg Spies in 1845 in Dudweiler (and a George Spies was also part of the 1852 arrival). Two things:
Also of note: Christian Sr.'s wife, Mary Catherine (Micka) Klar does not appear to have been on the ship manifest (though that handwriting sure is something). But she does appear in the 1860 census, so one way or another, she arrived in Wisconsin.

Anyway, if Margaret Klar IS the wife of George Spies, perhaps the Spies family made up the missing members of the Chris Klar household in 1855. In 1852, there were two Spies children, a boy and a girl. There's no room for a boy if George takes up the third male spot, but two girls would take up the last of the female spots.

But wait, there's more! Five out of seven were foreign-born, remember? So that would mean two of the household were children born in America. Working from this angle, perhaps both of George and Margaret's children that were with them in New Orleans had died, but they had two more (girls) in the meantime.

Anyway, even if Christian Jr. had some rough patches in life, he met this cute girl, Susan, in Platteville and they got married 18 April 1857. And their marriage certificate is a motherlode of genealogical information--parents, maiden names, birthdates, and birth places! 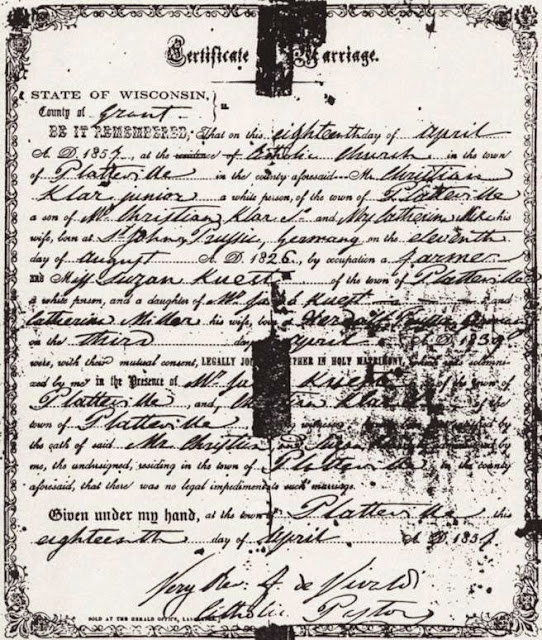 This is a scan of a photocopy and includes a note from Mrs. W.E. (Gertrude) M. Morris of Elburn, Illinois that it was made for Tommie Klar. Gertrude identified Christian Jr. as her grandfather, and Peter Klar as her uncle. This may have been Gertrude Holzer, daughter of Henry and Anna (Klar) Holzer; or Gertrude Manning, daughter of Daniel and Margaret (Klar) Manning.

Moving on to 1860, there is some evidence to bear out a connection between George Spies, Margaret Klar, and the Christian Klars with the information the 1860 Federal Census provides. The George and Margaret "Spear" family are immediate neighbors to Christian Sr. and Christian Jr. (now, each with their own household and name spelled "Clare"). The Spies have four daughters and one son. The eldest, Catharine, is nine years old and her birthplace is listed as Prussia. Going back to the New Orleans manifest, the youngest Spies was (at the best I could transcribe) "Spies, Carhar., age 2/4, female." I could believe that this particular scribble was intended to convey Catherine, and young enough that her country of birth might be confused or covered up. The two eldest, Catharine and Margaret, would have been born in/before 1855; and the next three, after 1855. This fits in with the 1855 household census of Chris Klar scenario proposed above. Verification that this is the case, or that Margaret and Christian Jr. are even siblings, is pending further evidence. 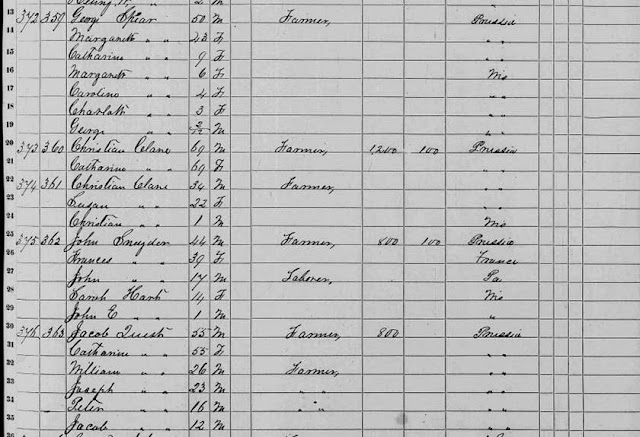 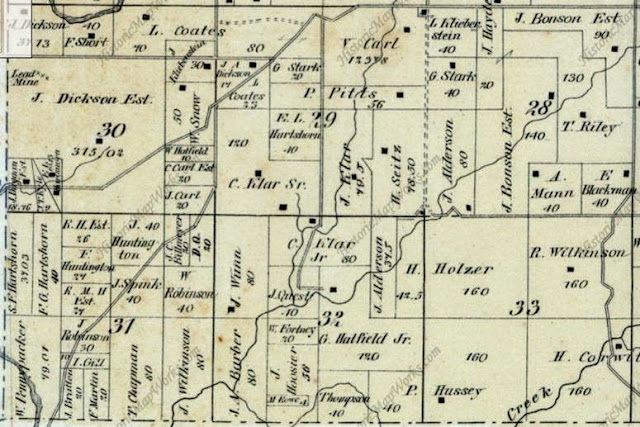 Let's take a break for now and let all that information sink in. Now the stage is set for our story. Stay tuned for further adventures of the Klar family!

Click here to view Christian Klar's profile on my Ancestry.com family tree with links to all the cool documents I talked about in this edition.

Contact me if you need help viewing/accessing these materials!
Posted by Unknown at 6:58 PM No comments: