Today I'm just highlighting some group/family photos from my collection of Klar pictures. Once you learn a few faces, it gets pretty easy to pick them out in other photos, too, so I encourage my Klar cousins to study these and then see if you can pick out familiar faces in your family albums! (And then scan and share the pictures for the rest of us, too.) Click on any of these pictures to be taken to a larger version on Flickr. 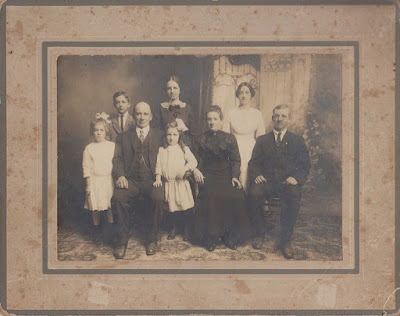 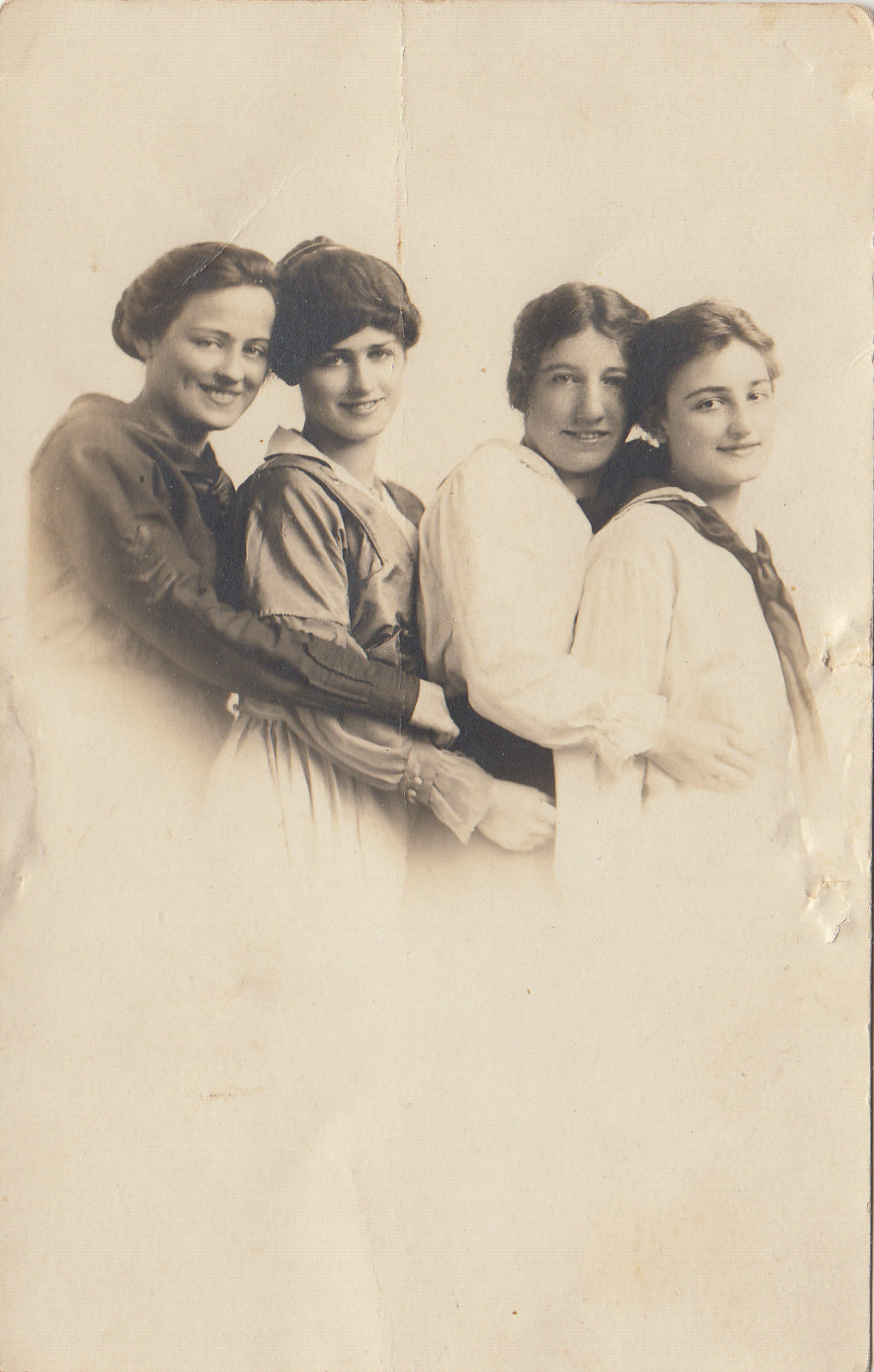 This is another cousin picture with two of Peter (Pete) Klar's daughters and two of their Specht cousins (Pete married Mary Ann Specht). We don't know the names of the Specht girls at this time, but left to right: Agnes Klar, Specht Girl, Theresa Klar, and Specht Girl. 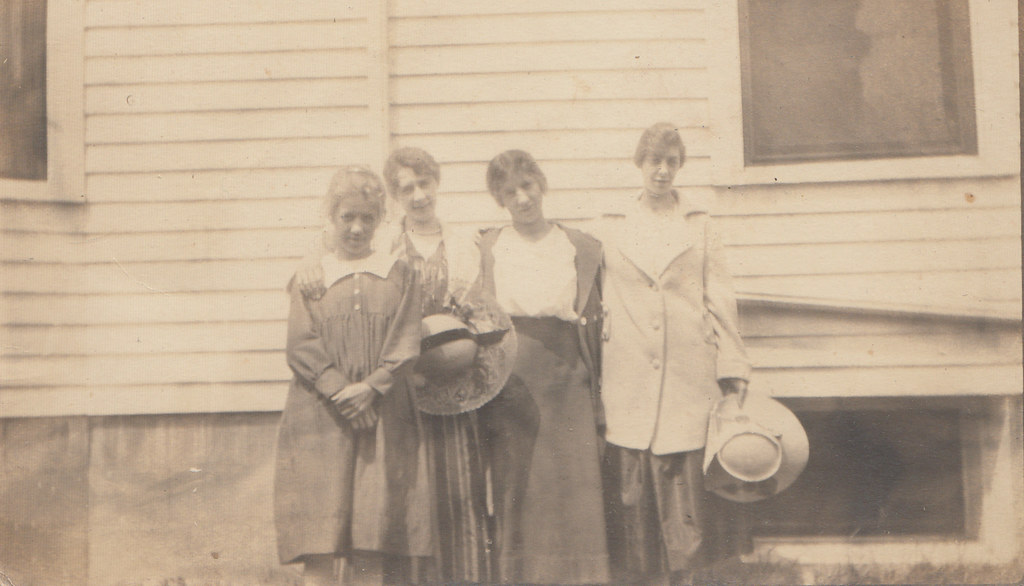 This is an assorted group. Written on the back are the words "Oh My!" and nothing else; interpret that as you will. Back row: Possibly Christian Klar III. Second row: Agnes Klar (I'm pretty sure) and Bill Fure (Christina's brother). Third row: Peter Quast (brother-in-law of Christian; uncle to the kids), Peter Klar, Mathilda Klar, Theresa Klar, and unknown man. Front row: Florence and Aloysius Klar. 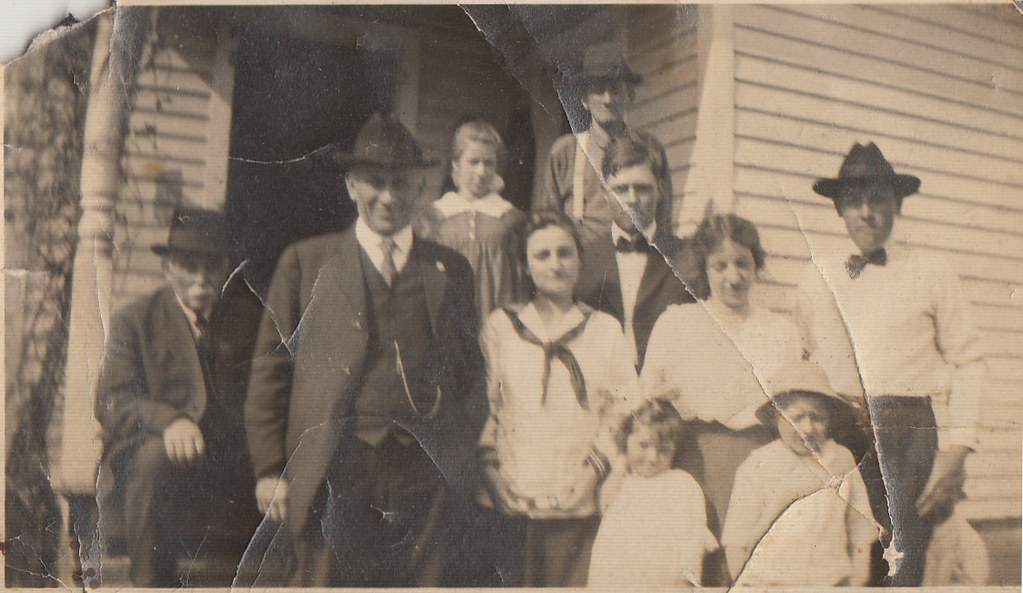 There are 15 faces in this next photo! Someday I hope we know all their identities. For now, we know: 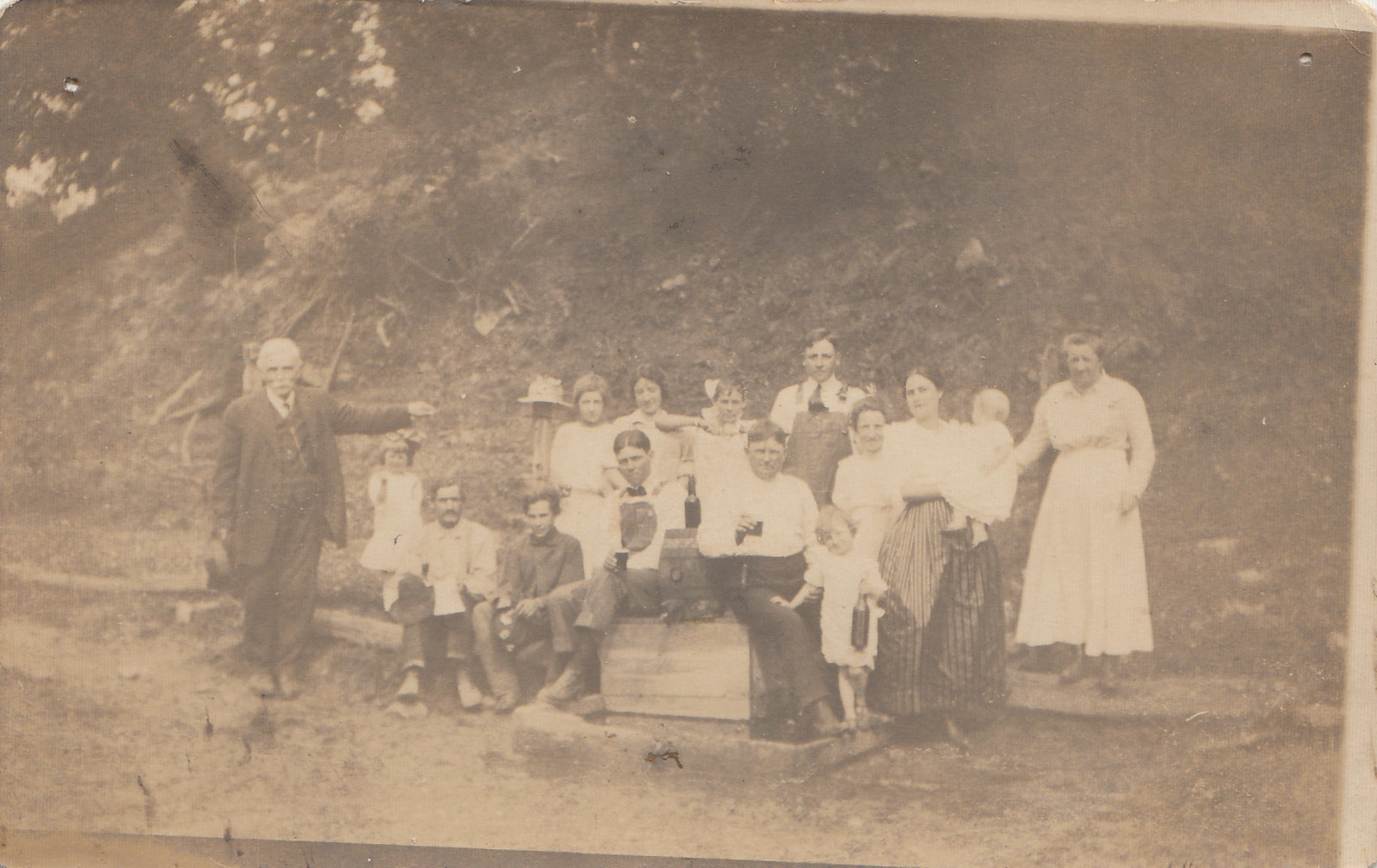 This is another great group shop. I'm going to split the identification between left/right groups (adults and children on the left, and a gaggle of young ladies on the right):

On the left side are Annie Holzer, Christian Fure Klar with a child, possibly her brother Bill sitting next to her, Christian Klar III seated with arms crossed, Pete Klar standing, and a girl seated in front of Pete. The gaggle of girls to the right: in back, Girl 1, Girl 2, Mathilda Klar, Theresa  Klar. In front, Agnes Klar and Girl 3. More pictures of Annie Holzer's and Bill Fure's children might lead to identifications of the young'uns. 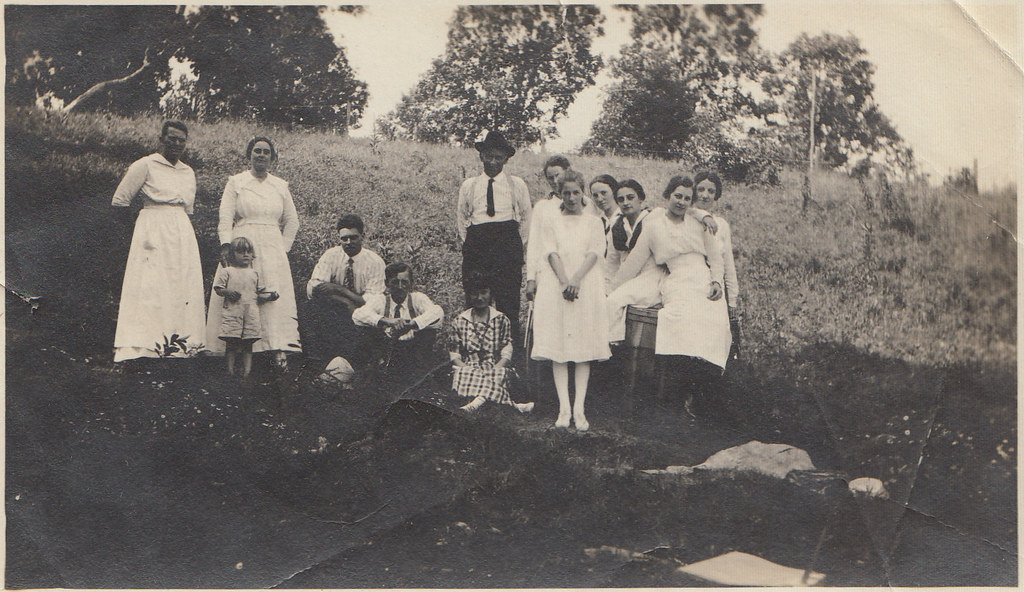 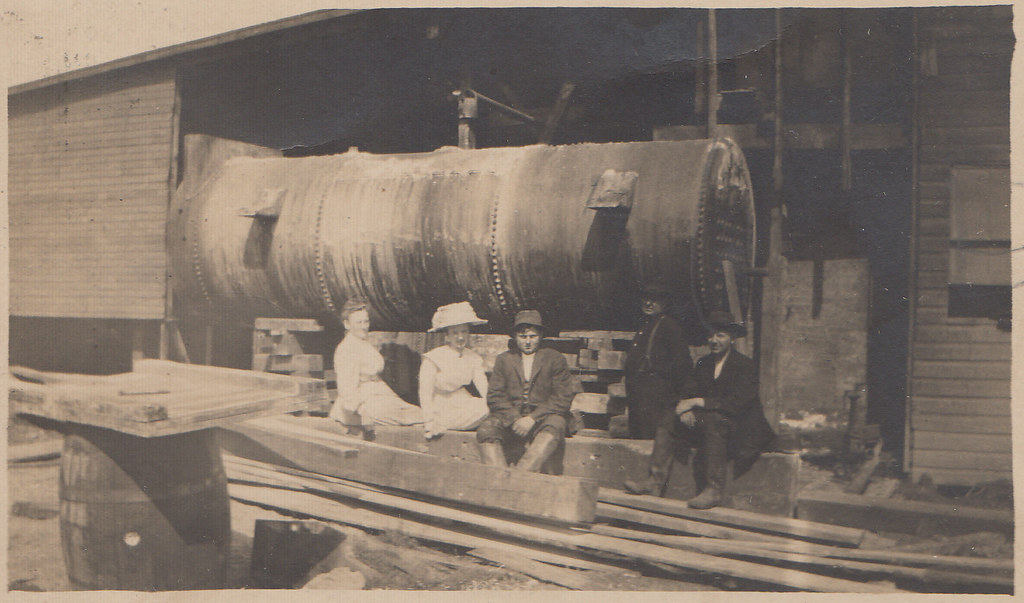 The two men in the back are stated to be brothers Pete and Anton Bonin. (Both married Klar girls. Pete married Pete Klar's daughters Mary, and Anton married Henry Klar's daughter Priscilla.) The boy in front is said to be my grandpa, Aloysius Klar. The other four kids are not identified. 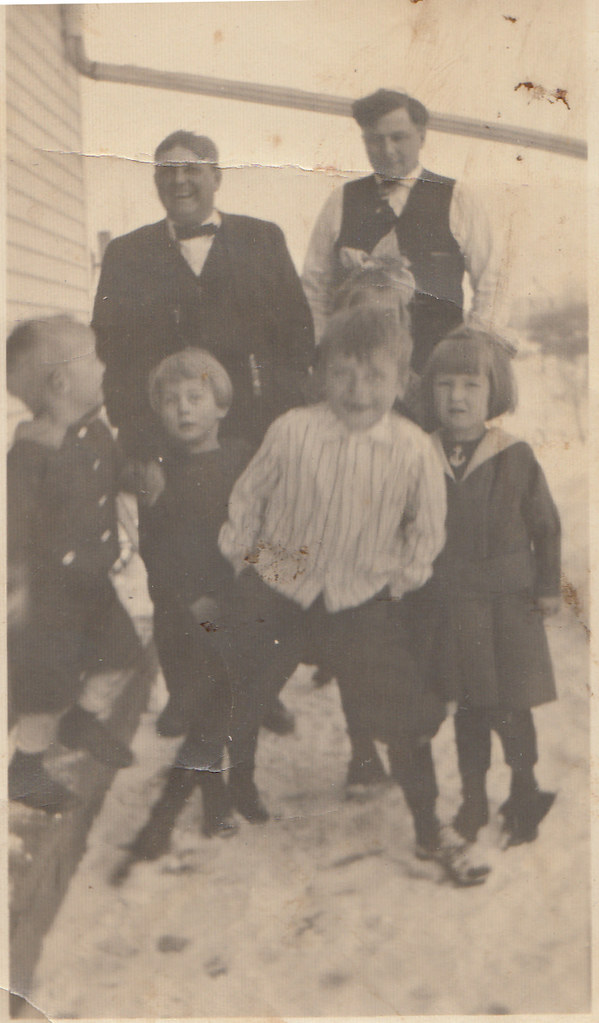 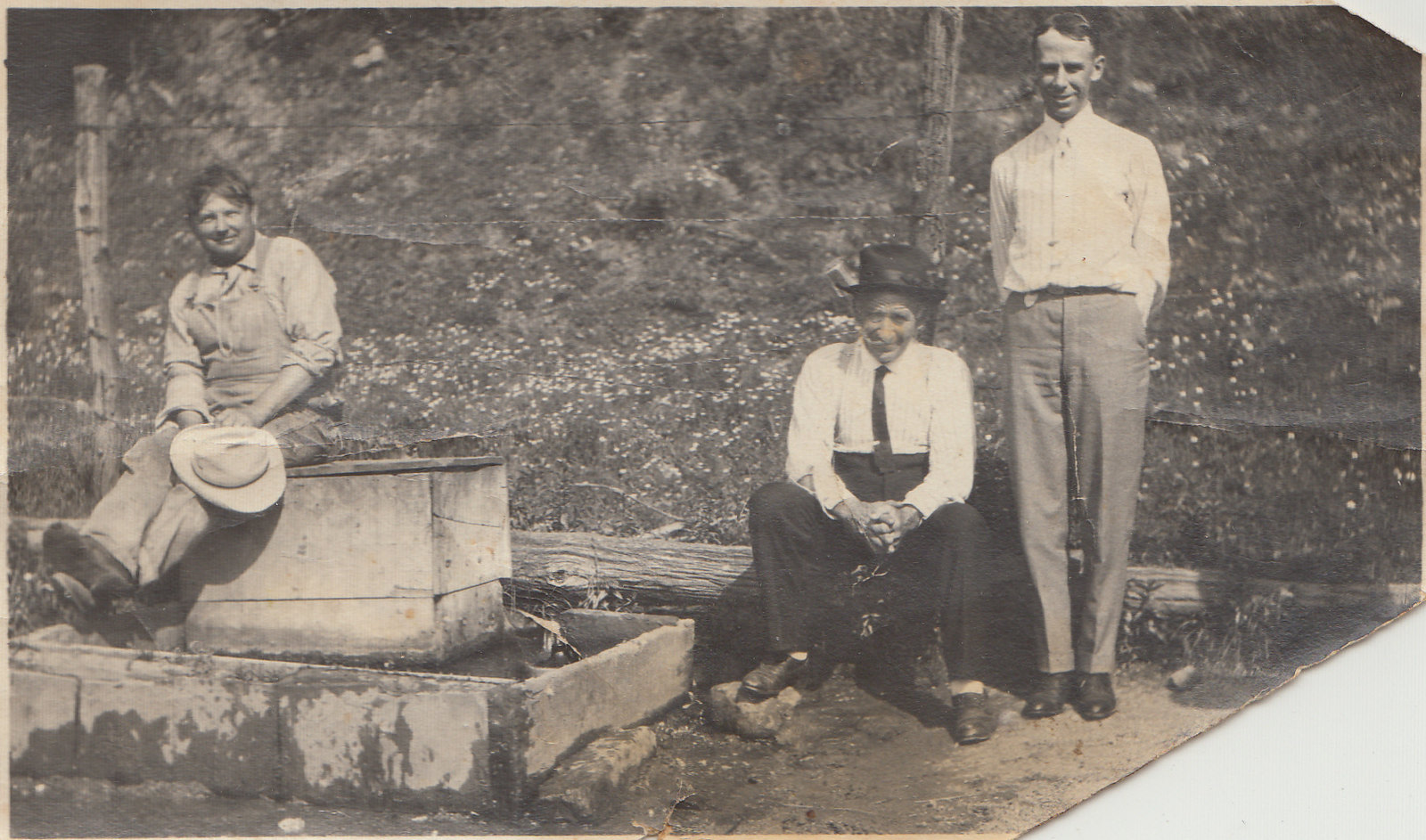 I have a theory that this may be a Fure family reunion picture. Two of Christian and Christina's children have been located. Can you find Mathilda and Cyril? (This is the test portion of this post.) The woman in the back row, third from the left, looks like Louisa Wunderlin Fure. Carole Fure noticed a resemblance between the woman on the far left and Elizabeth Fure Siepker. What do you think? Are there are other faces that you recognize? 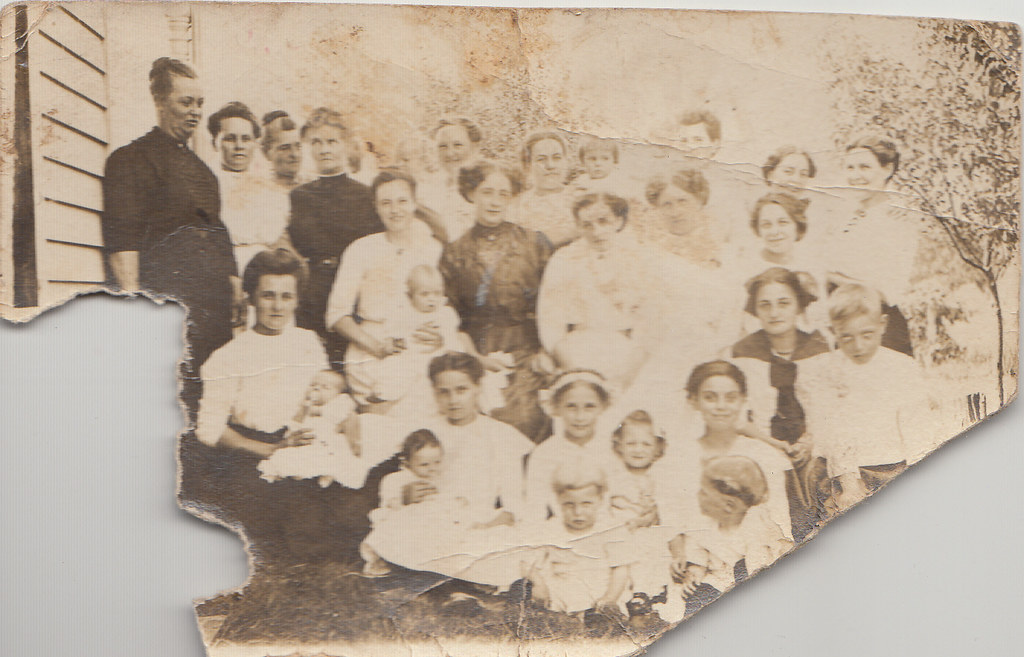